The Queensland fruit fly, also known as the Qfly is a serious pest of fruits and some vegetables that poses a significant threat to WA’s fruit and vegetable industry.

A mature female Qfly with eggs was detected in the inner city suburbs during the month of February this year. The fly was found in surveillance trap on a residential property.

An incident response from a surveillance trap is only generated when five or more male flies are trapped within a one kilometer radius over a two week period, one female fly is trapped or one Qfly Larvae is found. 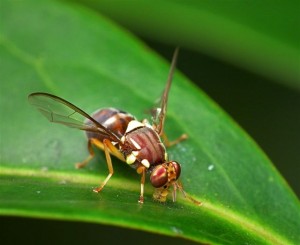 The Department of Agriculture’s response to detection is instant. Actions include surveillance trapping, widespread fruit inspections and baiting along streets, laneways and many residential properties in the infected area. Residents were also urged to check their own fruit and vegetables and to stop the movement of any home grown fruit and vegetables in Highgate, East Perth, Perth, Mount Lawley, Northbridge, North Perth and Maylands.

In early April a second fly was found within the same area which resulted in further surveillance and a more extensive baiting program.

The source of the Qfly remains unconfirmed; however it is believed to be entering our state through illegally imported fruit and vegetables.

Growing Together – Instilling Trust in Your Business